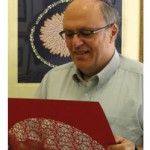 A self taught artist, Archie Granot made his first papercut in 1979 and has been creating paper art ever since. He has been creating ketubahs for over 30 years and his work is in public and private collections world wide.

He was recently honored by the Library of Congress