Home › What is Ketubah 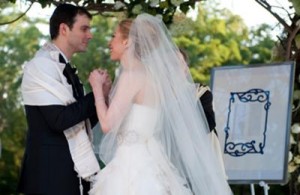 A ketubah is a special type of Jewish prenuptial agreement. It is considered an integral part of a traditional Jewish marriage, and outlines the rights and responsibilities of the groom, in relation to the bride. Nevertheless, there is no agreement in modern times as to the monetary worth of the ketubah, and its enforceability even in Jewish courts is in question even in theory; in practice it is never enforced.

The rabbis in ancient times insisted on the marriage couple entering into the ketubah as a protection for the wife. It acted as a replacement of the biblical mohar – the price paid by the groom to the bride, or her parents, for the marriage (i.e., the bride price). The ketubah became a mechanism whereby the amount due to the wife (the bride-price) came to be paid in the event of the cessation of marriage, either by the death of the husband or divorce.

It may be noted that the biblical mohar created a major social problem: many young prospective husbands could not raise the mohar at the time when they would normally be expected to marry. So, to enable these young men to marry, the rabbis, in effect, delayed the time that the amount would be payable, when they would be more likely to have the sum.

The mechanism adopted was to provide for the mohar to be a part of the ketubah. It may also be noted that both the mohar and the ketubah amounts served the same purpose: the protection for the wife should her support (either by death or divorce) cease.

The only difference between the two systems was the timing of the payment. A modern secular equivalent would be the entitlement to maintenance in the event of divorce. Another function performed by the ketubah amount was to provide a disincentive for the husband contemplating divorcing his wife: he would need to have the amount to be able to pay to the wife.

The content of the ketubah is in essence a one-way contract that formalizes the various requirements by Halakha (Jewish law) of a Jewish husband vis à vis his wife. The Jewish husband takes upon himself in the ketubah the obligation that he will provide to his wife three major things: clothing, food and conjugal relations, and also that he will pay her a pre-specified amount of cash in the case of a divorce.

Thus the content of the ketubah essentially dictates security and protection for the woman, and her rights in the marriage. (Conservative Jews often include an additional paragraph, called the Lieberman clause, which stipulates that divorce will be adjudicated by a modern rabbinical court (a beth din) in order to prevent the creation of a chained wife). In Orthodox circles, prenuptial agreements are becoming more common as well.

In a traditional Jewish wedding ceremony, the ketubah is signed by two witnesses and traditionally read out loud under the chuppah. Close family, friends or distant relatives are invited to witness the ketubah, which is considered an honour. The witnesses must be halakhically competent witnesses, and so cannot be a blood relative of the couple.

In Orthodox Judaism, women are also not considered to be valid witnesses. The ketubah is handed to the bride for safekeeping.