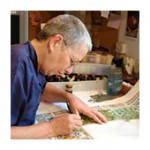 Enya Keshet was born in Pardes Hanna, Israel. As a young woman she moved to Jerusalem, where she studied at the Hebrew University and at Bezalel Academy of Art.

After the birth of her three children, she became increasingly interested in Judaic art. Her first experience in paper-cutting was an experimental one, when she created a papercut illustration for a school project her daughter was working on.

Her acquaintance with a traditional scribe (sofer) led her to the idea of combining the art of paper cutting with the calligraphy of Megillot (scrolls). Her artwork has evolved extensively from this beginning. Later she moved back to her hometown of Pardes Hanna, where her studio is today.

Enyas artwork combines paper cutting with calligraphy and color illumination enhanced by gold leaf, all done by hand on parchment. In addition, Enya has developed a series of laser-cut reproductions of her work, done in paper. Other techniques, such as photo-chemical etching and sand blasting are used to create designs in glass, stone and metal.